(This is episode 11, from Jasper’s point of view.) 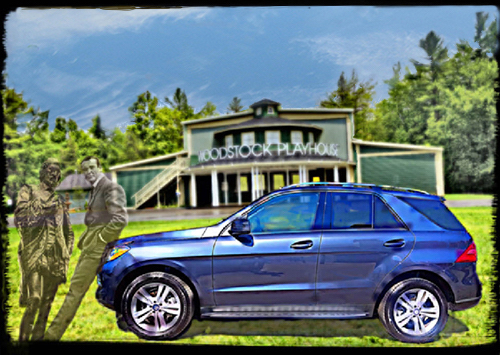 Last summer during Hamlet’s intermission, a very drunk man in his 50s, wearing a beautifully tailored beige summer suit and matching shirt, knocked over chairs, spilling drink from a plastic champagne glass, and stumbled over to Jasper King beneath a rear archway.

Jasper hated being addressed as his character on Children’s Minds and suspected this man with the slight English accent and precise diction knew it.

The man threw his empty champagne glass on the ground. “—what do you think of Abominable putting the intermission at the end of Mouse Trap?”

“I don’t know what to think. I’m astonished.”

“Of course, but the curtain falling on Claudius’s: ‘Give me some light—away!’ was splendid. Bloody lot of nerve for Abominable to disregard my script. And yet as she has it, nobody will snooze through Hamlet’s aborted voyage to England.” Fletcher inserted a black cigarette into a long black holder and gestured. “No smoking in here but as I was saying—or asking—is Abominable not proof that diabolical imps dart among us?”

“Granted. You may speak candidly. Have her spirit and beauty compromised you? A rude guess but an even wager—yes, she’s obviously discomposed you.”

Watching the cigarette holder between Fletcher’s teeth, Jasper recalled Tara’s opinion of the renowned director. Perhaps, she hadn’t been overly harsh, after all.

He held out his hand, “Pleased to meet you, Mark Fletcher. I’m Jasper King.” and waited while Fletcher capped his flask. The men shook hands without any clenching or clammy limpness.

Fletcher smiled widely and raised his tinted spectacles. “Good Lord, you are magnificent looking. If as reputed, however, you are unpersuadable, I hereby double my bet concerning you and the ravishing Abominable.”

Jasper raised an index finger. “I can’t imagine whom you mean.”

“Mr. Fletcher, if you’ve been referring to Brooke, my children’s care-giver, by some loathsome name, don’t do it again.”

“Slow to catch that, weren’t you? She happens to be my godchild and I’ve always called her that. Save your ultimatum for someone else and heed my evaluation: Your attempt to speak English fails, because you wield a dread bit of knowledge and not a working whole. Fortunately, my affinity for autodidacts is pronounced, because you need me, Jasper King. Thus I shall tutor you next summer, providing you star in my play.”

“Will Brooke assist you?”

“This year, I gave her Hamlet as a testament to her prodigious gifts. The troupe performs Shakespeare exclusively, but never with the lucid complication and catharsis Abominable has orchestrated.”

“I haven’t seen Hamlet before. Of course, I know its reputation. But I didn’t anticipate it to be a revelation.”

“The words are luminous, but most productions are a shambles. Next summer poses an altogether different challenge. The playwright is an untalented, dim-witted boy with a tin ear, whose parents are generous backers. However, I shall direct and you shall learn to speak like an Englishman of the upper military class, which will be crucial for the role the multi-hyphenate Korean is devising.”

“What role and who is your Korean?”

The lights dimmed and Fletcher stole the seat next to Jasper, fanning the previous occupant away. He drank from his flask and whispered details Jasper would have missed otherwise. Both men, and the audience in general, experienced Hamlet as a bonafide tragedy, catharsis and all.

After the actors’ curtain calls, when Brooke stood on stage, Jasper King bolted. Fletcher’s mockery about her derailing him barely scratched the surface. The girl had caused him to lose his bearings twice—and that was before he’d recognized even a glimmer of her inner light.

Jasper ran for his rented car and Fletcher wheezed in the distance.

Shifting into reverse, Jasper saw Fletcher still in pursuit and waited a minute.
Reaching the car, the old man heaved, hands on his knees, gasping for breath.

Jasper said, “My apologies but I must leave immediately.”

“Fear not. I shall tell Abominable you simply couldn’t stay long enough to congratulate her.”

Jasper waved and hit the gas. Was it possible she’d see on her own that his invitation to watch a movie had been insanity? No, it was not. He felt sorry and stupid but knew no alternative.